An old picture of my Mule, painted to run with Ashlynn in my Highborn lists. An old picture, but it gets the idea across about the colour scheme as mentioned in the previous post. Maybe I'll take some newer pics and post them again, but thay would likely require me to do a spot of repainting on him first, and he's not really at the front of the queue. He has since been based.
Posted by Derek at 12:05 AM No comments: 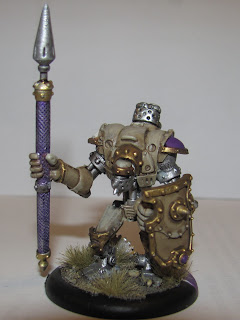 When Warmachine came out at first, I got into Khador. Then Superiority came along, with a fine selection of Mercs that wouldn't play for my favoured Faction. Fortunately, they would play together, and my Highborn Covenant army, with Ashlynn at the stern,was born.

Since way back then, I've had an urge to get and paint up Sam MacHorne and her crew, but I didn't pick them up till a couple of years ago. I love that every one of the sculpts in the box set is different, and there are some real characters in there. However, they were expensive points wise in MKI, so didn't see the table much.

In MKI they ran well with a Talon marshaled to them. His disabling of jacks made the opposition easy targets for the nets and special abilities of the rest of the crew. I already have a Talon painted up for my Highborn list, in the deep purple scheme, and I wanted my Devil Dogs to fit in with this scheme, whilst still retaining their cohesiveness as a unit, especially for their marshaled jack. So, we have the white, purple and bronze highlights showing through on the shoulder pads and trimmings, with a khaki main colour to keep the unit together. This guy is finished now, but for one thing. I want to really tie him to the unit by painting their insignia on his shell. My free hand is not up to the job, so I'll be finding a way to cheat. 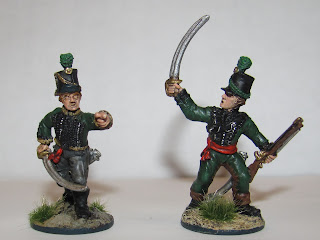 As an additional post, mostly for me, as I currently have my paint scheme jotted down on a scrap of paper, that is sure to disappear the next time I'm looking for it. Here is a tutorial on how these guys are put together.

My first dilemma was how to base them. Most larger scale games require riflemen to be paired up at least. I was looking to be able to skirmish with them in battles of less than 10 men per side, at least to start, but I wanted the option of putting them together on a larger base in the future if need be. This is more so the case the for French Infantry I got to fight against them.
I solved this by getting the smallest bases I could get my hands on for a reasonable fee. 1c each to be precise, as they are based on pennies. On top of this, I have a mix of sand and Polyfilla. Simple, cheap, and I think very effective.

Next, the paint scheme. I undercoated in grey, as I didn't want to go to black, in case it was too hard to see the dark green on top. Next, I do my base colours, let them dry, give a lavish coating of inks, then highlight to taste.

1993. I had just started university. I had been into role-playing for a very long time, and had done my share of wargaming, mostly fantasy/sci-fi, but I hadn't touched on the historical stuff. I had yet to try fencing, but to be sure, the swashbuckling gene was there. I had a very faint Idea who Wellington and Napoleon were, but my interest in the Napoleonic era was faint to non-existant.

Me and my Brother sat down to flick through the channels on the TV one evening, to see what we could find to hold our interest, not holding our breath. Then we saw Sean Bean swagger on screen, and were totally fixated for the next 2 hours (2 hours!).

The historical drama series 'Sharpe' was likely a gateway to many of my generation of historical gamers, and as such, you'll be hard pushed to find a painting blog that doesn't contain at least a few minis from the 95th rifles hidden in their galleries. Why shoudl this one be any different?

As I previously mentioned, I picked up a couple of Perry riflemen free with a magazine, then went online to buy a few more. Of course I had to find a range that would supply a version of the man himself. I though Front rank's range was consistently of good quality, and although their Rilfeman Captain with Rifle (not standard issue, for swashbuckers only) may not be in the most dynamic pose (and not carrying a heavy cavalry sabre), he fits the bill.

I went on to find myself a skirmish rules set, and settled on Ganesha Games 'Songs of Drums and Shakoes'. This seemed to have the right mix of RPG elemets and Skirmishing rules, that can easily be adapted for a more swashbuckling feel. To act as the dastardly French in my scenarios, I picked up a box of Perry Miniatures French Line infantry. As is par for the course, I have yet to play a game.

Onwards to the pictures. 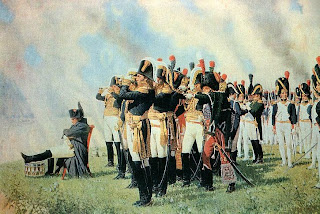 As part of my recent painting stint, I chose a bunch of Napoleonic minis I had kicking around in the old pile of metal for quite some time. I've mostly been doing my riflemen for use in a skirmishing game, but to give me a break from the green, I picked up a little vignette of Napoleon. This mini was released as part of the Wargames Illustrated 'Moments in History' vingettes, but my FLGS had one of each in stock. I figured this one was one that fitted an era I was likely to play, and even if I never used him in a big battle as a commander, I could always use him as an objective marker in a smaller game.

Furthermore, as it's the 200th anniversary of the battle of Borodino, a painting by Vasily Vershchagin's of which the little big man's pose is taken from (see above). I figured it was a timely mini to paint. As always, click for bigger pictures. 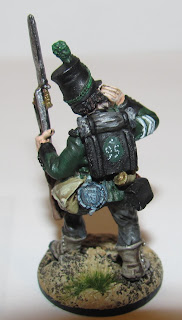 I've been getting down to some proper painting over the last few weeks, at least an hour or two every week! Yes, I am fully aware this is not very much, but I've been trying to speed up my painting by going for what is essentially a dip style. Base coat - Devlan Mud - Highlight. I'm actually quite impressed with the results. A teaser of which is posted here. I'll for sure be going back to many of my uncompleted units for various games to get them completed much faster than I previously would have.

The models I chose to go with are the ubiquitous 95th. A couple of years back, Wargames Illustrated gave away a free pair of perry Riflemen with the magazine, which in turn prompted me to go online and get them some company. I chose Fronk Rank Miniatures, partly because of the figure in the centre of this picture, but more on him later.

I don't have access to all the pics I took, but I think this one's a good start to show them off. I'm particularly proud of the numbering on the back of the pack. I'll update with the rest shortly. 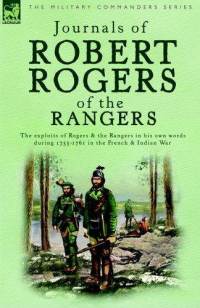 Having now finished the book, I can say that my initial disappointment was misplaced. The action het up near the end as the war moved up a gear. Many mentions of Quebec, Quebec city and Montreal as the British invasion if Canada got into full swing, and many ideas for scenarios to be sure.

I did feel a need for more research on my part during and after reading it, so I could place the actions in geography. I feel the book would do well to have either a companion book, or an expanded edition, where maps of the areas spoken of were supplied, and possibly also more information on the actions mentioned to give a broader context. I'm sure these books do exist, but if they don't, they should. Ah, a job for another day. Maybe once I'm retired and have more time on my hands than I know what to do with.

I should (re)mention here, in terms of other blogs covering the era, Flintlock and Tomahawk does a fine job. No, I'm not being paid commission, but I do think it's an apt journal to link to, especially since there's a recent post about a re-enactment of the "Battle on Snowshoes".

Buy your copy from Amazon here.