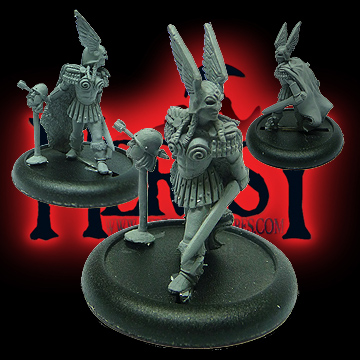 I get easliy distracted. I am almost finished one project, but a 2 week break from the brushes, a box through the post from Heresy miniatures and oops! Shinybloodyitis is a royal pain in the buttocks.


But when this mini arrived from Heresy, I knew it had to be made into a little vignette. The head on a stick just cries out to be placed on a scenic base. I immediately though of the metal dead trees I bought back in June, and a bunch of little crows I have collected from the Old Witch and my Menoth Wracks. I found a tree that was suitably dead, stuck it on a base and covered it with crows. I had initially though to give the tree some Autumn foliage, and go with an autumnal paint scheme on the Valkyrie, but I don't think I have enough branches on the stump to make this so. I may have to sculpt a small branch or two before going any further. ﻿
What use is she as a gaming model? That's a good question. To be fair, my actual gaming is so limited recently, an excersise in modelling and painting is enough of an excuse to go with, but let's play the 'what if' game. I have based her on a large (40mm) base, and as such she can be used as a hero/warlord in SAGA. This would of course take my miniature count for SAGA to 2, both of whom are worlords, but I feel this is a moot point, as I think both models are nice little vignettes, and both were a joy to work on. This does mean I will be looking out for some regular viking models to complete the warband to a playable state. 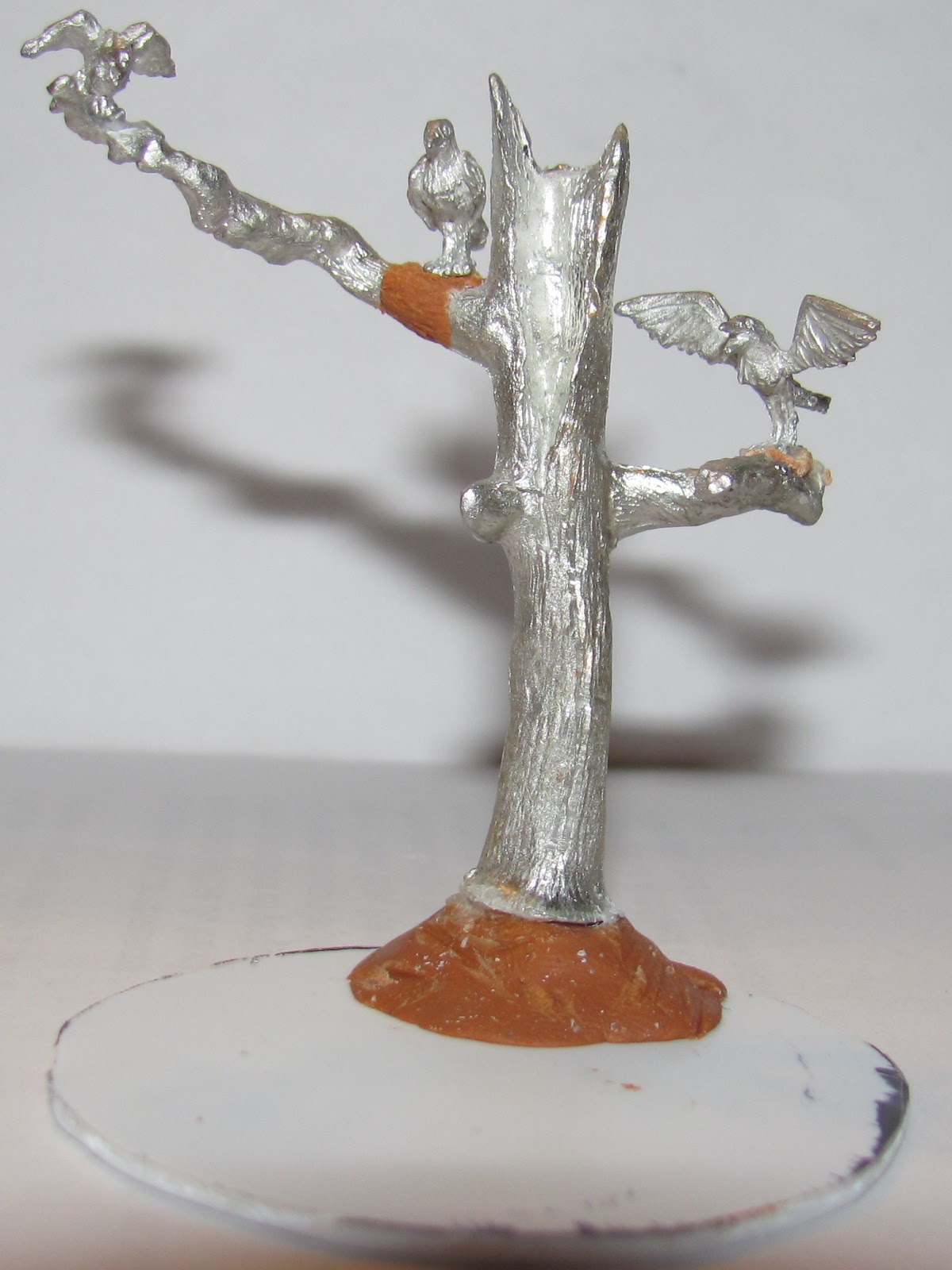 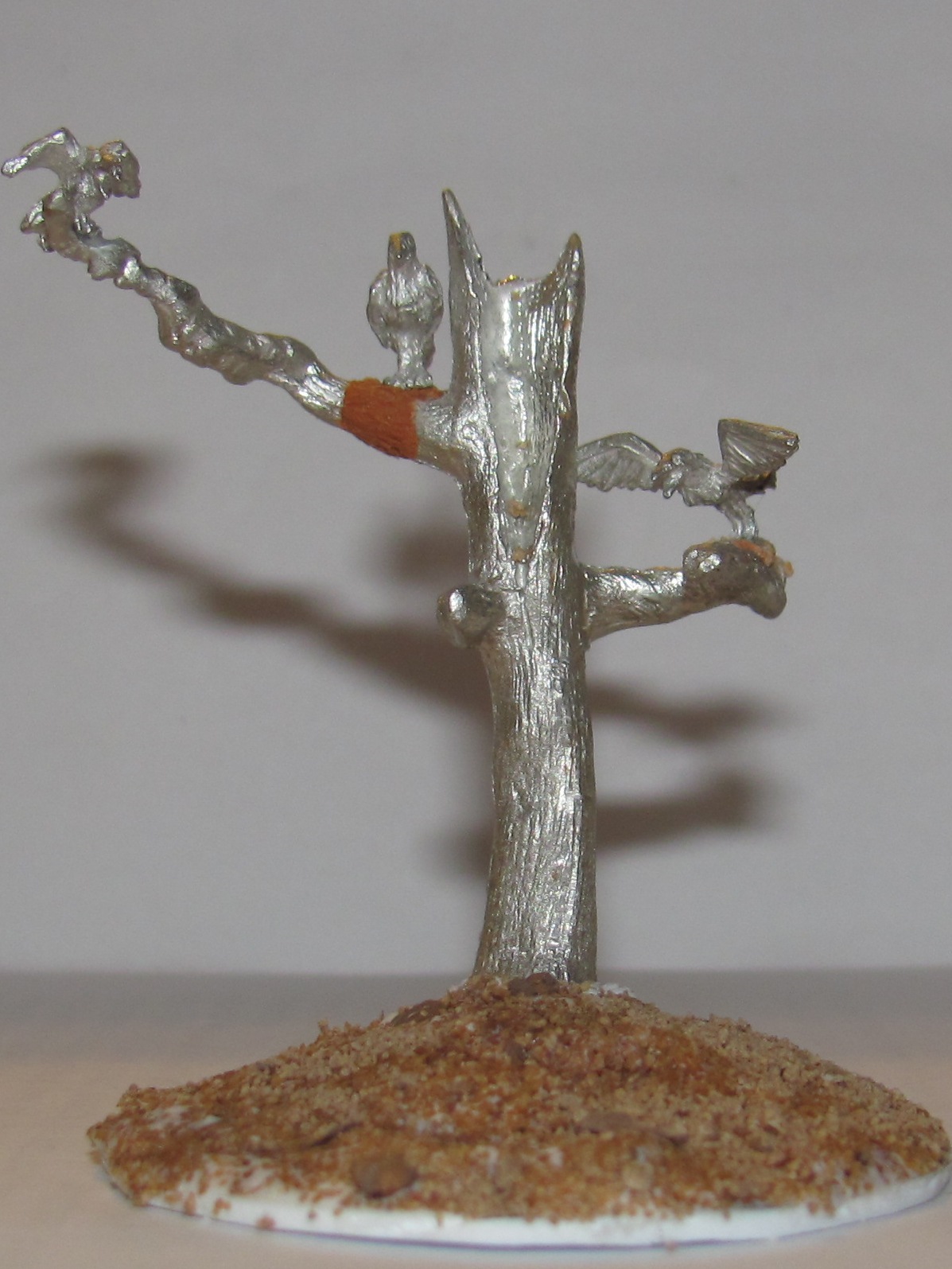 The other day, I posted a bunch of links by accident (I have draft posts of links for various subjects). As this post, sparse as it was, garnered at least 1 comment, I shall repost the links I have collected for my hypothetical viking/Saga force here:

Bronze Age Miniatures, have a small but perfectly formed range of Vikings and Picts. Including some nice historical (i.e. not half naked) female Vikings.

Part two of my Sekrit Projekt. Now coming together. Here's a kind of how-to for the guns I have scratch built.
The starting point for each cannon was a sausage of milliput, rolled to the desired thickness, and left overnight to dry. In fact, the thicker of the two required nearer 48hrs to be completely rigid. I tried to make a couple of grooves in the barrels (on the left hand side in the above picture) to add some interest to the otherwise plain surface.
Brass rods were placed through the barrels at the right distance to balance the guns when placed in their carriages. A little more milliput was used to sculpt the mouths of the barrels, and ﻿a little more around the brass rods to thicken them up. A little knob of milliput was added to the rear of each barrel, and a touch-hole added to each. I tried to cut a couple of grooves onto the barrels, just to add a little decoration. This turned out to be harder to do when the milliput was dry, as it had a tendency to crumble.

The cannons were then mounted on the carriages made from the moulds﻿ I had previously made from the Sea Dogs Deck Guns. The pins through the barrels being used to support the guns. The carriages really take a couple of uninspiring guns and make them into believable artillery pieces. 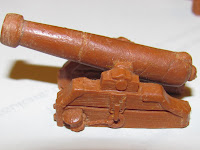 Complete and ready for painting. I had tried to make a mould of the Khadoran anvil from the shield of a M.O.W. Kovnik (to represent a captures Khadoran Gun), but the curvature on the underside was not enough to go round one of the barrels. I can try to sand more of the underside to make it fit, or curve the mould more once I have taken an impression of the symbol, but neither is sure to work.

Otherwise, I have spoken to a friend who has suggested he may be able to find some Fleur-de-lys from the shoulders of some GW battle maidens that I can use to make a mould. That would be ideal.
Posted by Derek at 11:38 AM 4 comments:

The entries for September's Challenge are here. Again, a great range of games on show, and some well painted miniatures (I do not include mine in this category).

Of course the October challenge was going to be based on Halloween. What else could it have been? In fact this month we got an early heads-up on the challenge, as it requires some conversion/sculpting:

It is the month of the dead, we change bodies

Halloween is almost here and the children (of all ages) are working on their costumes. They are preparing to turn to the ultimate evening where they will collect tons of candy (or drink for those who are thirsty, it depends).

For the month of October, we invite you to paint a model that you previously converted. Bits swap, kit bashing, sculpture, everything is permitted.

Easy peasy. This coincides exactly with the Sekrit Projekt
I have been posting recently. More of which I shall post very soon. Perfect.
Posted by Derek at 10:22 AM No comments:

September's challenge turned out to be a real rush job in the end. As I stated at the beginning of the month, I tried to paint the whole unit, and was doing so systematically, but with 2 days to go before the deadline, I had to get at least one of the troopers finished. I am not at all happy with the way this guy turned out. but here he is in all his dubious glory. The base looks chipped already, that's what comes of moving him around to get the pictures before the paint dries. Like I said, rush job. 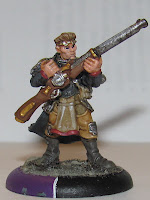 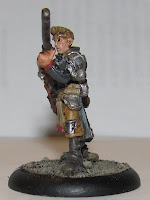 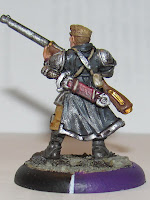 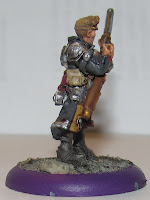 Purple base to tie him in with the rest of the Highborn Covenant, black coat to tie him with the other units I will be/am completing and red  piping on the sleeves and loin cloth to tie the unit together.

Here he is beside the rest of his troop. These guys are not off the paint queue yet, and I will finish them soon, however they may be put to the side to complete October's challenge, which very handily coincides with the Sekrit Projekt. 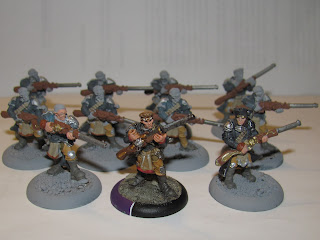 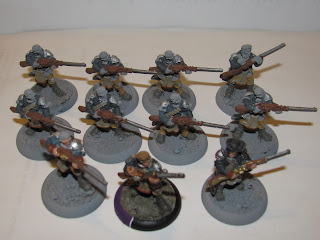