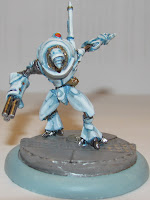 First two minis from this set complete. All that really needed doing to the Artemis Biomech was to paint the base. I'm not happy with the decking. I mean, I love the bases, but I'm not happy with the paint job on them. It seems a little lacking. The Pointman's base is particularly plain.
Pics after the cut. Warning, some pictures are of a bare bum in 28mm!
Read more »
Posted by Derek at 9:24 PM No comments: 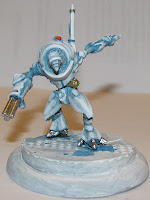 Following on from my last post, I realised if i was ever going to use the Viridian Strike Force i had to wonderfully painted, I would have to find them some opponents. Fortunately, I had bought the Syntha boxed set at the same time, for that very reason.

I decided to go with a different paint style here, with much more layering. As the bulk of these guys are in effect robots, it means I can practice this technique, and it doesn't matter as much if it doesn't look 100% natural.

Finished of the Pointman and the Artemis Biomech this evening, will post the pics soon, until then, here are some WIPs: 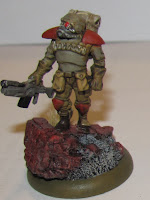 This was what you could call an exercise in speed painting, this whole squad was painted in less than 3 hours. Somewhat of a record for me. I think even a record in that I have a whole squad of anything painted.

The reason for painting them is as follows. I bought a pot of P3 Battledress Green, with the aim of using it to finish off these guys, but I wanted to see if it dried to a khaki colour, or a darker green. This unit was sitting at the front of the cupboard, all based on their fancy bases,and undercoated ready to go, so I figured, why not? It's a fair enough colour to use for urban camouflage. 2 evenings later, and here we have a fully finished, (tabletop quality) Urban War Strike force.

In answer to my original query, I think it's a little too dark for the khaki colour I was going for, especially as my Infinity minis are undercoated in black (these were in white geso). Back tot he drawing board for that one.

I bought these about 1-2 years ago, along with a box of Syntha, with the intention of being able to run demo games for Urban War. I've been playing the Urban War family of games (including the predecessor Void) for quite a few years. In fact, I used to live around the corner from their bricks and mortar shop, when they had one in Edinburgh (nice way to spend too much money). I have a few painted minis (but not a completed force) sitting in my parents attic back in the old country, which I plan to pick up the next time I'm back over there, thereby having at least 4 basic forces to chose from. At least now one for those forces will be fully painted. That may be enough to attract the odd opponent.

More pics after the cut 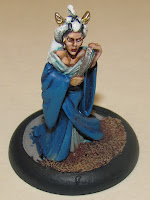 Whilst mixing up some flesh tones to paint up the Devil Dogs, I pulled this little mini out to touch her up. I posted about her here, but after I saw the closeups, I was really unhappy with how grainy and patchy her face was. I feel better about it now, although it looks much smoother in real life. The pics under the cut just go to show how I need better lighting for my photography. 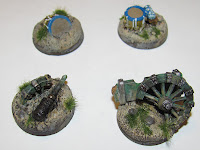 My laptop finally gave up the ghost, so I have a) a little more time to paint (less distractions), and b) no way to post what I have painted. I have snuck onto my good lady's PC this afternoon and so am posting these few pictures of the painted cannon wreck markers/scenery/space filler/objective tokens, or whatever you think they're good for.

From what I have seen, green was a good colour to paint the cannon wrecks to make them French. I will likely use the rest to make a few more bases and paint them blue to represent British artillery wreckage. 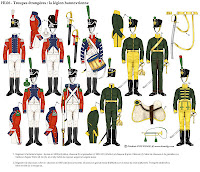 This evening has been rather bitty in terms of what I got done. My previous post shows I was inspired to get on with some Napoleonic French. However, I found out to my dismay that the French Line Infantry i have are for the period 1812-1815, so don't cover the Peninsular War, which was where the Légion Hanoverienne and Légion du Midi served (both were disbanded before the 1812 campaign). A mild setback, as I'm sure no-one would notice the difference if I painted them up as I wanted anyway. Still, it got me round to putting a few more of these minis together, and on different bases from my usual pennies. maybe I can just add a quarter underneath (25cents). A possible, if not more expensive, option. 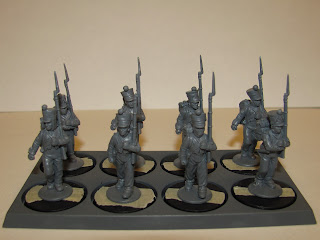 Also, I picked up some movement trays from GW, for their Lord of the Rings game War of the Ring (in the picture above). These allow me to fit my minis based for skirmish into formation for larger games without needing to rebase them, although I will have to figure something out for the 95th, as they're all stuck to pennies. Maybe I'll just stick them on top of other bases as they are. I also wanted to make use of terrain, placed on the same bases as the miniatures. I have seen this method around, and it works really well for 2 things. It allows you to make mini dioramas within the units, adding to the character of the figs, and also, it fills out the unit whilst saving on minis. To this end, I wandered into my FLGS, and bought some bits, mostly GW cannons and the like, for a couple of dollars. I brought them home and chopped them up, and this is the result. 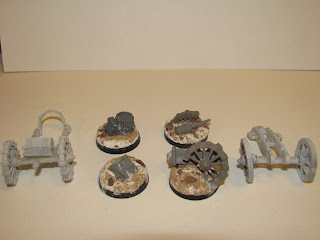 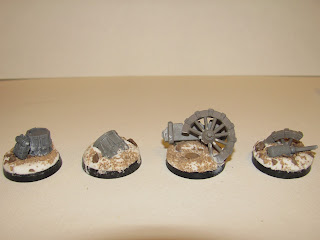 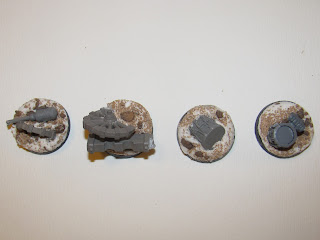 I'm sure they could also be used as objective markers, or even casualty markers at a push. I want to get on and give them a coat of PVA, and get them painted, but I'd best wait at least 24 hours to let the Polyfilla dry.

Lastly, I put a little more paint on my Napoleon Diorama. The drum may be finished, but Raza has a ways to go. 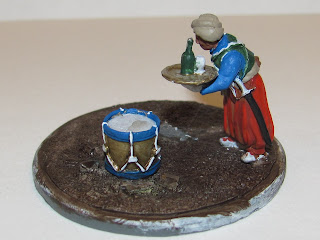 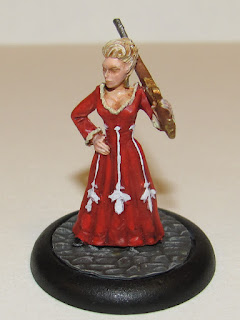 With a little inspiration from here, I got round to painting this Reaper mini. I have a few Western minis kicking around, either straight historical minis like this, or with an eye to use in Deadlands. Back in the old country, I played in a many year long Deadlands campaign (which is still running, despite my absence, although I did try to play online for a while). We never used minis for the game, but did on a rare occasion play Rail Wars or Savage Worlds as wargames/skirmish games. I have since had a soft spot for the era, and pick up appropriate minis when I see them (yeah, cos you know, I need an excuse!).

Anyway, the colous scheme is simple enough, and I'm happy with the use of Bleached bone to get the blonde hair. I always end up making blondes far too yellow, which may work in some cases where I'm looking for a more cartoony effect, or with modern day miniatures, but for realism, this looks better. Of course the camera shows all the flaws in the skin tones, and she would profit from having some eyes, but I think she's rather neat as is.
I may have to go back and ink round the white parts of the dress, to make it pop a little more, and to hide the flaws.

I have a box of Perry French Line infantry, that I bought to go up against the rifles in Songs of Drums and Shakoes. Some are based, but not all, and none have even a lick of paint on them. They have been languishing in the back of the cupboard, waiting patiently to be painted. Finally, I have been inspired to do so, by an article in the latest issue of Wargames Soldiers and Strategy. There is a short article on the Légion Hanovrienne, with a one shot picture of a miniature painted as a trooper from the Légion du Midi. I know next to nothing about either of these units, except for what is written in the article (Légion du Midi doesn't even have am English language wikipedia site), but the article thinks about moving away from a field of blue Frenchmen and red Brits. I like this, and what's more, both units were active in the Peninsular, and both sets of conversions in the article take the base Victrix French infantry as a base, meaning there should be little or no conversion work required to use the Perry minis I have from the same era.

Other commitments that currently stop me from painting as much as I would like will be finishing in a week or so, so  here's hoping I'll be able to move on this in a timely fashion


Links after the cut, as much for my own reference.