It's that time again where we look back at the year past, and take stock, before making plans for the year ahead.

This year has most definitely been the year of Dystopian Legions for me. I have painted a little over half of the minis I have for the game, and all the rest have at least a basecoat on.

Models that I have completed include:

I have a bunch more to finish off, but they'll have to wait for next year now. I also have an APC I got as a pressie, and have ordered the Light Dragoons to round out my force.

What's more, I have played a whopping 6 games of DL this year. I take pictures of each one, with the intention of writing up battle reports, but that has just not happened. In summary though, my first couple of games were wash-outs. My Britannians are very soft and squishy in melee, and my Hussars take a little getting used to. Once the games started going up above 100 point (Starter Box size) they came more into their own, being able to use their superior firepower at range to lay down enough fire to do some damage before getting trapped in melee.

I'm doing alright against the Prussians, I really love my Terrier and my Field Gun. The Lethal Ability is just wonderful against models with multiple wounds. Against the Empire of the Blazing Sun (Japanese) I'm still struggling to find the best combination of forces.  There are a couple of local players who own FSA armies, but they have yet to throw down against my mighty Britannians.


Anyway, here are some shots of my last game against EotBS.
In other goals, I have tried hard to keep up with the Colore Ton Monde challenges this tear, and have done okay. I dropped the ball in January and October, but managed to get the rest done in time.

I have tried to update my Gallery, but I seem to have reached the limit if 20 pages. Who knew the interwebs had page limits? I'll have to find a way around that.

First off, I want to finish my Britannians that are more than half painted, as well as the APC (a New Years gift) and Dragoons. (ordered, but not yet arrived)  I was initially tempted to buy into the Antarticans when they come out, but I'm going to hold off on that. One army for a game I don't play regularly enough is more than enough for now.

Other games that I am interested in playing in the coming year include Saga, Muskets and Tomahawks, and The Hobbit. Yes, the Hobbit!. I have just watched the second film, and I am very keen to give the game a try. If only I can find a way to do so without giving GW full Price for their minis. Maybe I'll get some of the first wave of minis in some sales over xmas. I do have some Rohirrim for the LoTR battle game I can paint up (they also double as vikings for SAGA, so win win!).

This is, of course, alongside the games of Warmahordes and WFB (at 500 points) should be more than enough to be getting on with.

As I mentioned in my last post for this month's challenge, finding minis to paint in a winter theme is not an issue, anfterall I have two warmahordes armies that fit the bill. So here we have some pics of my painted Blackfrost Shard figure. Well, one of the three brothers to start.

The cape came out much better than I expected. I was left wondering how to complete the runes round the cloak edge, but a simple dab or two of Mithril Silver over the runes, then a dark blue wash and they look fine.

The other two members of the unit better jump up to the front of the paint queue before I forget how I did this guy! 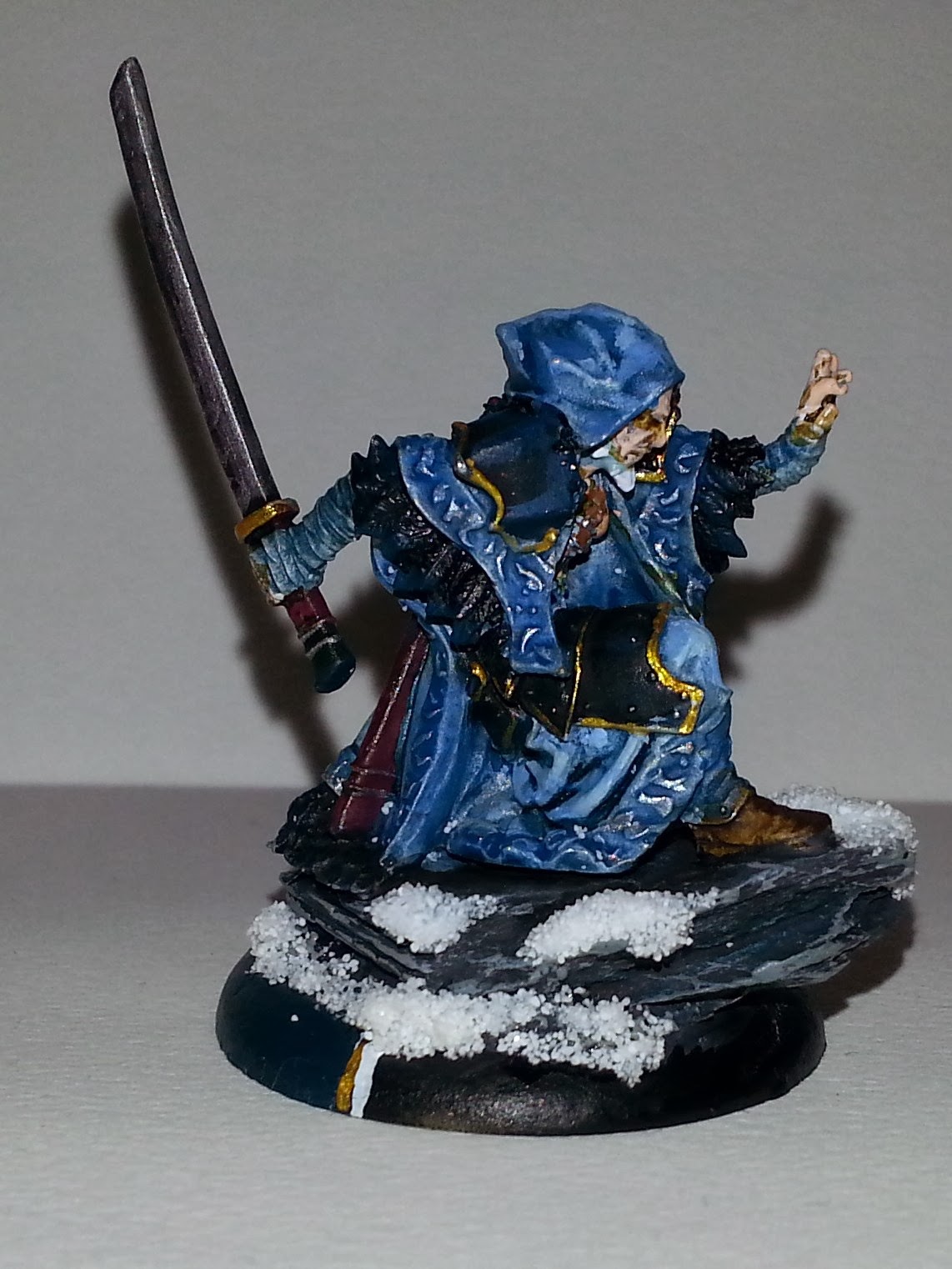 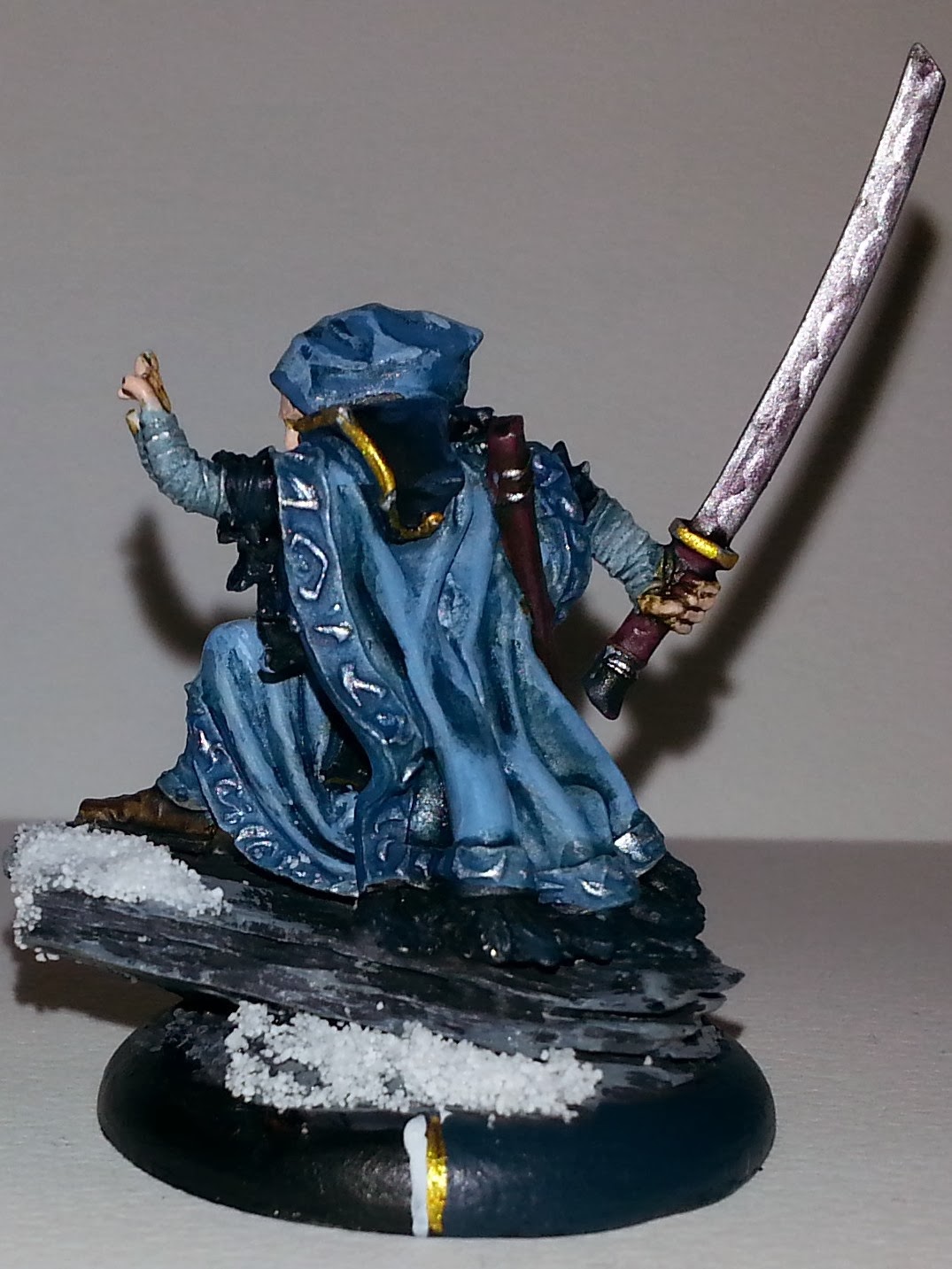 Going to have to go back and finish the face, it's looking really crude and unfinished there.
Posted by Derek at 8:40 AM 2 comments:

My regular gaming group, the Oldies, is running a painting swap for over the Christmas holidays.

It was somewhat of a challenge to come up with a miniature I wanted someone else to paint. Not because I am under any delusions that my painting is of superior quality, quite the opposite in fact. It was more to do with having a mini that could be painted up in any scheme that the other guy wanted (we didn't put in a request as to what we wanted done with the mini, so it is fully at the discretion of the other guy).

For my part, I settled on Madelyn Corbeau. A mini that I have never put on the table and therefore is rather far down on my list of what to do next. However, it is a mini that I like the look of, so she will see play some time I'm sure. What's more, as a courtesan, she can be done in any colour scheme imaginable, and still fit the bill. Decision made!

As to the mini I was given to paint, I got a Feralgeist. Again, as a minion model, he does not have to fit in with the scheme of the army he plays with. I have my own one of these, and I have been thinking what do do with him, and had thought to use him as a test model for some Testors fluorescent paints I have. i may have to paint up my own first, rather than spoil someone else's mini with paint I don't know how to use, so that's this holiday's painting schedule booked up! 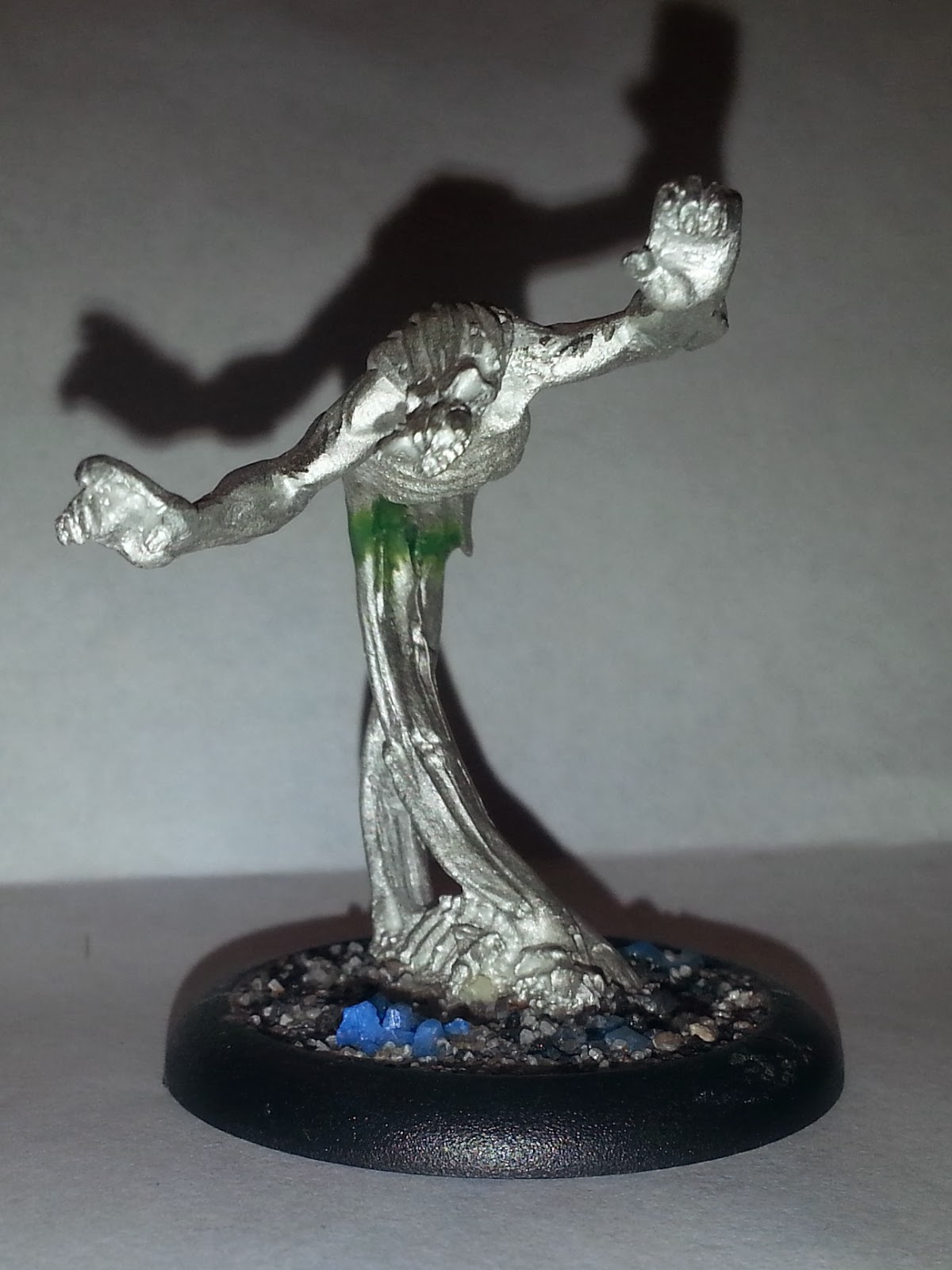 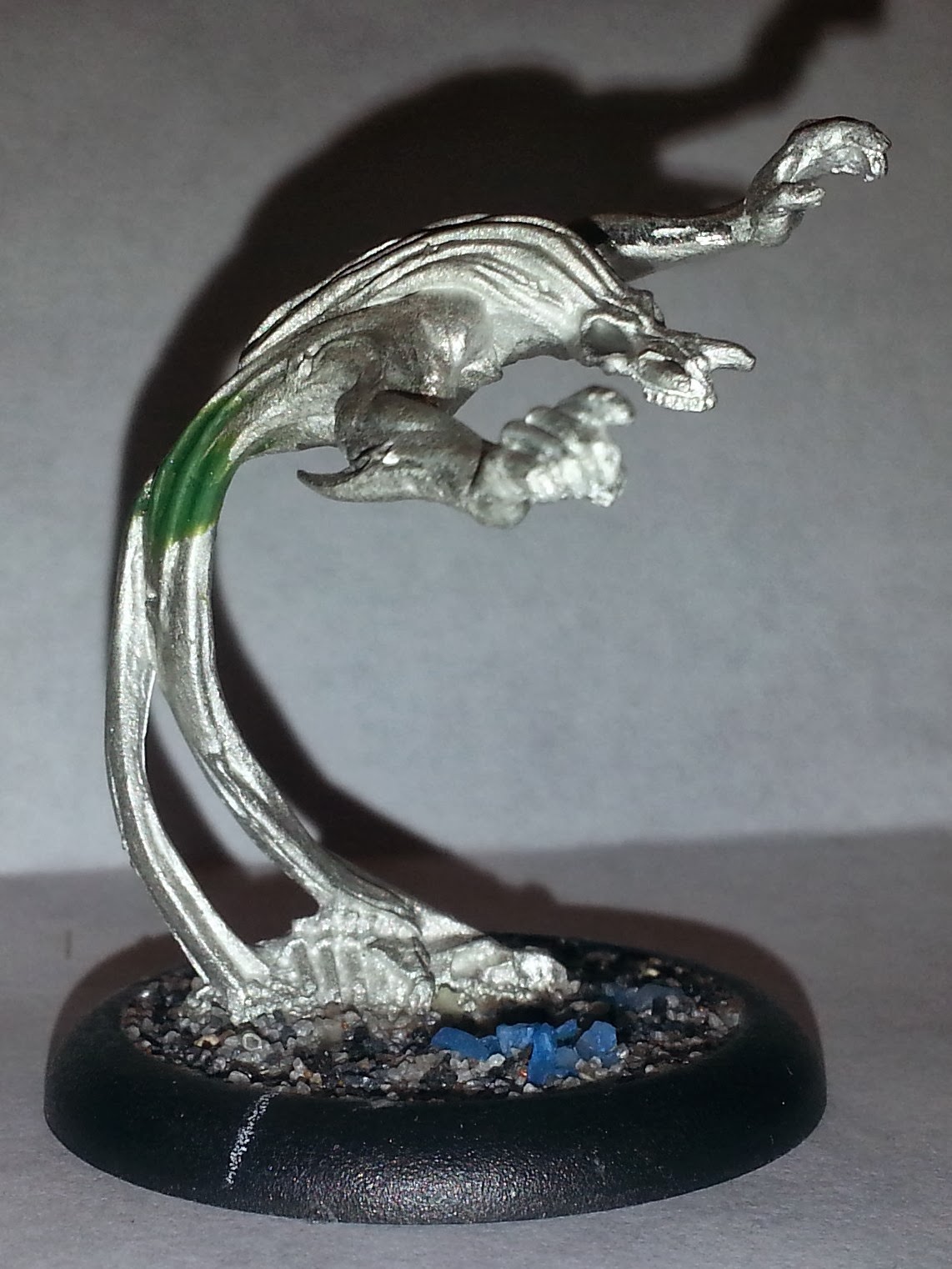 I'm a little delayed in posting this month's challenge, but here we are. First off, here are the results of last month's challenge to paint a sub-commander, some great paint jobs as always. My entry has it's own post here, although the pictures don't do him justice, he seems very red when compared to other pics on the Club Chaos site. Still, I can't be an expert in everything!

Moving on to this month, the theme for December is quite an obvious one,

December is the official start to winter. This year we had the snow early, and unlike usual early snow-falls, it looks like it's here to stay.For the month of December, we invite you to paint a model in mainly white, or with a winter theme.

Thankfully for me, I have a whole winter themed army (two in fact) in my Legion of Everblight, just waiting to be painted (with Khador being the second).  I have the Blackfrost Shard ready and waiting to go (already started now, after all, it's the 10th already). These are really nice minis, and they're painting up well. Pictures will be posted shortly.