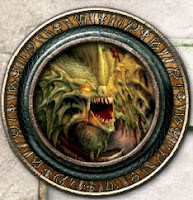 The last edition of No Quarter had a spoiler for a new minion Warlock for Hordes. Specifically Rask, a Bog Trog 'Lock. A run down of his abilities can be found on the Battle College here, and his mini (yet to be released) is here. All of which has got me rather excited about putting together a list. It has been a while since I was so enthused about starting a new faction (which was the start of my Menoth collection a lwhile back), so I'm quite looking forward to it.
As you all know, I have a fully painted unit of Bog Trogs, that I am rather proud of, but who have never seen the table. Now that i have the paint scheme, it should be easy enough to rustly up a Warlock with the same scheme and put them on the table. The only issue is, I don't have any of the other beasts or units that are required to run either a Blindwater Congregation list, or Rask's theme list.
﻿﻿﻿﻿﻿﻿
﻿


All this excitement got me wandering round the web, looking for interesting tid-bits about this guy (by which means I found the theme list and pics) as well as looking for inspiration as to what models work well with this guy, and work well in general for Blindwater lists (in terms of synergy). You could then call this post a summation of my researches, that are completely un tested on the field. A nice review of the theme list from a Gator player can be found here as part of the Rot 'n' Roll blog, which is a great introduction to Gators as a faction.

From posting questions on the PP forums, it seems there's little you can take for the Blindwater congegation that will steer you wrong (except maybe the Boneswarm). However, it seems the base tactics would involve having a minimun unit of Bog Trogs as his 'Body-guard' to be used as fodder for his Call to Sacrifice ability, and one to fill the role they are designed for as ambushers (for which it seems they are more highly prized than I first thought). Otherwise, anything goes, as it seems this guy is good enough to work well with all the other minis available. Whatever else I take, it seems I should get a unit of gators too (if not two), as they're just bad-ass and will of course work with my Legion army.
Furthermore, there will be a new Bog Trog Unit released with the Hordes: Collosals book, namely the Bog Trog Swamp Shamblers. Not much is known about them, other than they are undead. A cheap unit to use with Rask's Call to Sacrifice ability (which allows him to sacrifice a Bog Trog to not die, and have 1 life point left instead), which in itself is almost enough of a reason to buy them, despite what other abilities they may get.

The Hobbit: An Unexpected Journey

Went to see the Hobbit last night. It was awesome.

It was really great to take another trip into the Middle Earth as imagined by Peter Jackson (and Alan Lee, and the rest of the minds behind this work)


I'm not 100% convinced of Martin Freeman in the role, he brings a little too much Arthur Dent to his Bilbo, at least for this the first of the trilogy, but I hope as the character evolves over the next 2 films, that this becomes less of a thing.

Saw it in 3D 48 fps (frames per second), or whatever the new technology is. I think it worked rather well. I had listened to a review before going where it said this technology meant that, with some of the slower scenes, it was like being at a live production at the theatre, rather than being in a cinema. i think I agree with this statement, although I am not perfectly comfortable with the 3D glasses yet, and wouldn't mind the chane to see the film in 2D, just to be sure.
﻿﻿
﻿﻿
Some other thoughts:

I thought that Balin was played by Ken Stott, then wasn't so sure. Turns out I was right.

The Golum scene rocked, and was almost (if not exactly) word for word from the book. Especially in 3D, it really was like being in the room with the two as they matched wits.

It hasn't so much made me want to buy into the Hobbit wargame, as is currently being pedalled by GW (although, I do fear that if/when they release a Thranduil mounted on an Elk figure, I will have to buy it), but it really really took me back to my youth, where me and a few friends would sit round a table each and every Sunday (for quite a few years) playing MERP. As GM, that meant I was steeped in Middle Earth lore, if not from the primary sources, then at least from the I.C.E modules for the game, of which I had a rather impressive collection. Those were the days!

Off to rewatch the first trilogy.

I leave you with Thranduil on an Elk, just because!
Posted by Derek at 2:29 PM 1 comment:

November's entries are all now up on the Club Chaos site. Go and check them out here.

As always, an extremely high standard of painting, and some very manly miniatures to be found, all with impressive facial hair top boot. I particulalry love this one:

﻿
﻿
This month's challenge is as follows:

Translated quickly, christmas is coming, so paint something in red and white. What else could the December challenge be about?