I am Scottish. I live in Quebec. These are facts, the rest of this post contains nothing but rambling, politics and points of view. If none of those interest you, please feel free to skip this post, as it is not wargame or gaming related.

Still here? Okay. I have another blog, a personal blog. One that has been running in various guises for about 14 years now with sporadic regularity. Mostly it is pictures of my kids, and other stuff that would only ever be interesting to family and possibly my future self. However, the first two facts I stated in the beginning of this post dictate that I have a keen and special interest in the goings on in Scotland over the last couple of weeks, and that has been taking my attentions away from the delights of wargame blogging, hence the radio silence here. If this is something that interests you, and you want to hear my point of views on these matters, then please feel free to click on this link and go read the blog. They appear in reverse chronological order in that link, so scroll down to the bottom of the page to get the start.

If this is of absolute no interest to you, and I would assume that goes for the most of my readers, then don't worry, I won't be insulted if you don't click. Now that's all over with, I'll be back to this being my main blog, and there'll be some pretty pictures of painted toy soldiers for you all to admire in the very near future.
Posted by Derek at 9:54 PM 2 comments:

Earlier this week, I had a demo game of Wild West Exodus. I had seen this game pass by on Kickstarter, and kept one eye on it, but in the end, although I was taken by some of the miniatures, (the not-the-crew-of-the-Serenity set in particular) there were none of the factions that took hold of my imagination enough to buy into it without trying it first.

The game I had was between the Warrior Nation and the Union army. We played with slightly cut down versions of the starter boxes, as some of the minis from the stores demo sets were still off getting painted. In the end we played with $400 of miniatures per side (they use $ as points in the game, the minis didn't cost that much!).

As a brief overview of the rules (from my 1 game), you make up your gang, and even though the trooper card has multiple wounds scores on one card (up to 5), they all act as individuals, not as a unit. Players then take turns activating up to 3 figs at a time (your choice, but you must activate 1). All rolls are d10, Rolling over the stat, with modifiers. Not rocket science.  Each fig has a number of action points, which can be spent to move, fire, aim, charge (and a couple others which I didn't get round to using). The basic troopers are pretty dull by themselves, but the presence of the special characters (bosses and underbosses) who are named/limited characters really boost the abilities of the basic gangers (at least this is the case with the Union, not surprising as they are the army faction)

Overall, I found it to be a fast game, easy to pick up, and both players are always involved through rolling to save rather than damage rolls, that and the fact you only ever have to wait a max of three activations before you get to respond. there is also an interrupt action, but I won't say much on this as we didn't use it (seems to be better for snipers).

The minis are nearer 32mm in scale (close to Dystopian Legions I think), and are plastic. They seem to hold a little less detail than the DL metal sculpts, although I didn't hold them side by side to compare. I saw a similar effect on some of the other plastic minis I have seen come out of recent kickstarters, and it may be due to having to over use the molds to fill orders fast, so it could be that this improves with time. The minis also come with a guide on how to put them together, almost unknown in a minis game.

They are also supplied with unique bases. These bases are a little more than 30mm (they may be 32mm) and instead if having the recess in the centre like common 30mm bases, which is great for basing detail, they area actually raised in the centre. This means they make the individual minis more like centrepiece models.

One nice thing about the way the game is being marketed, if you go to the store on the WWE web site, you can get the stats for each mini, so you know exactly what they do and what they cost without having to buy anything first. I like that openness.

Here are some pics from my phone of the Union troops I put in the field: 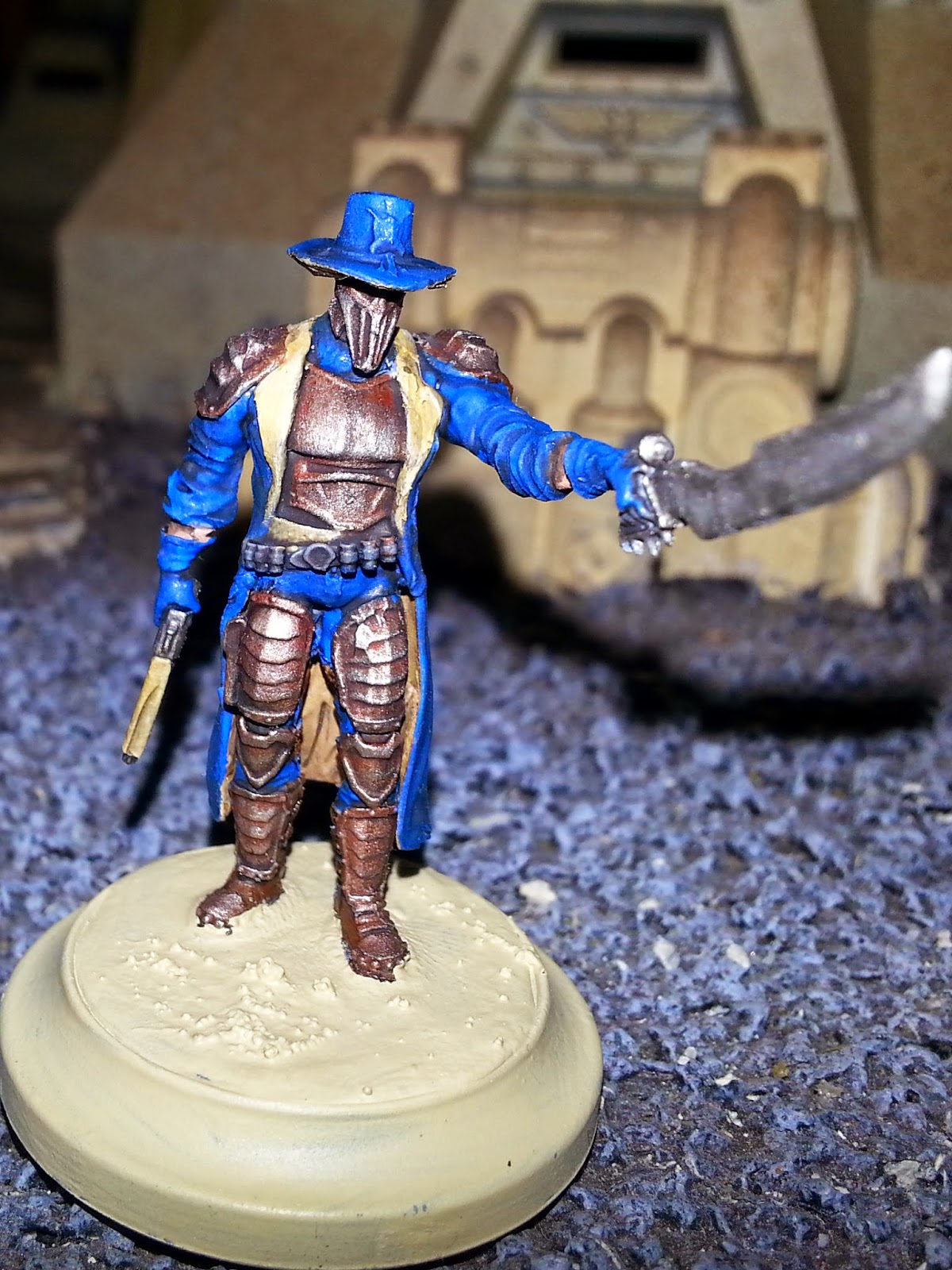 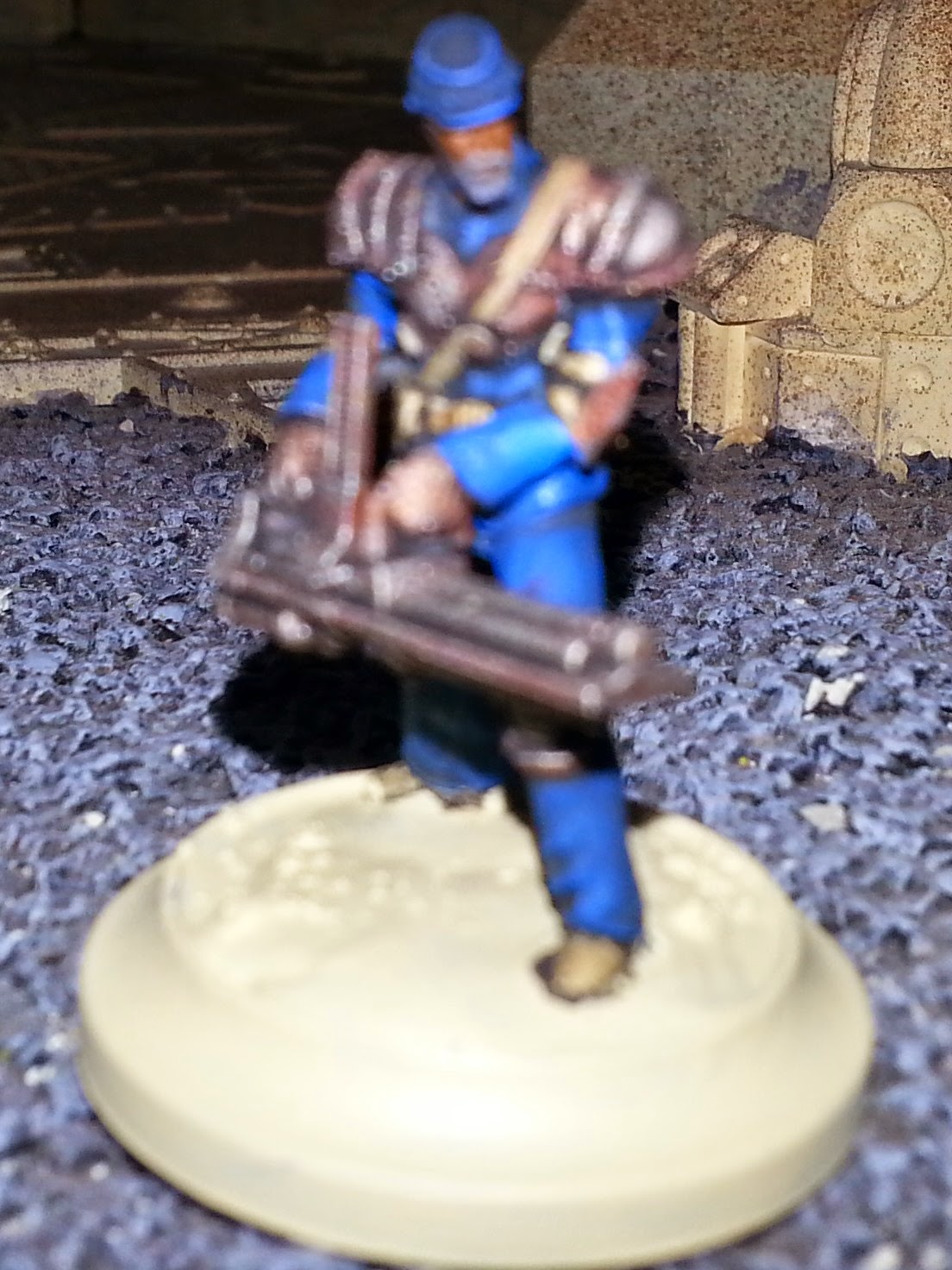 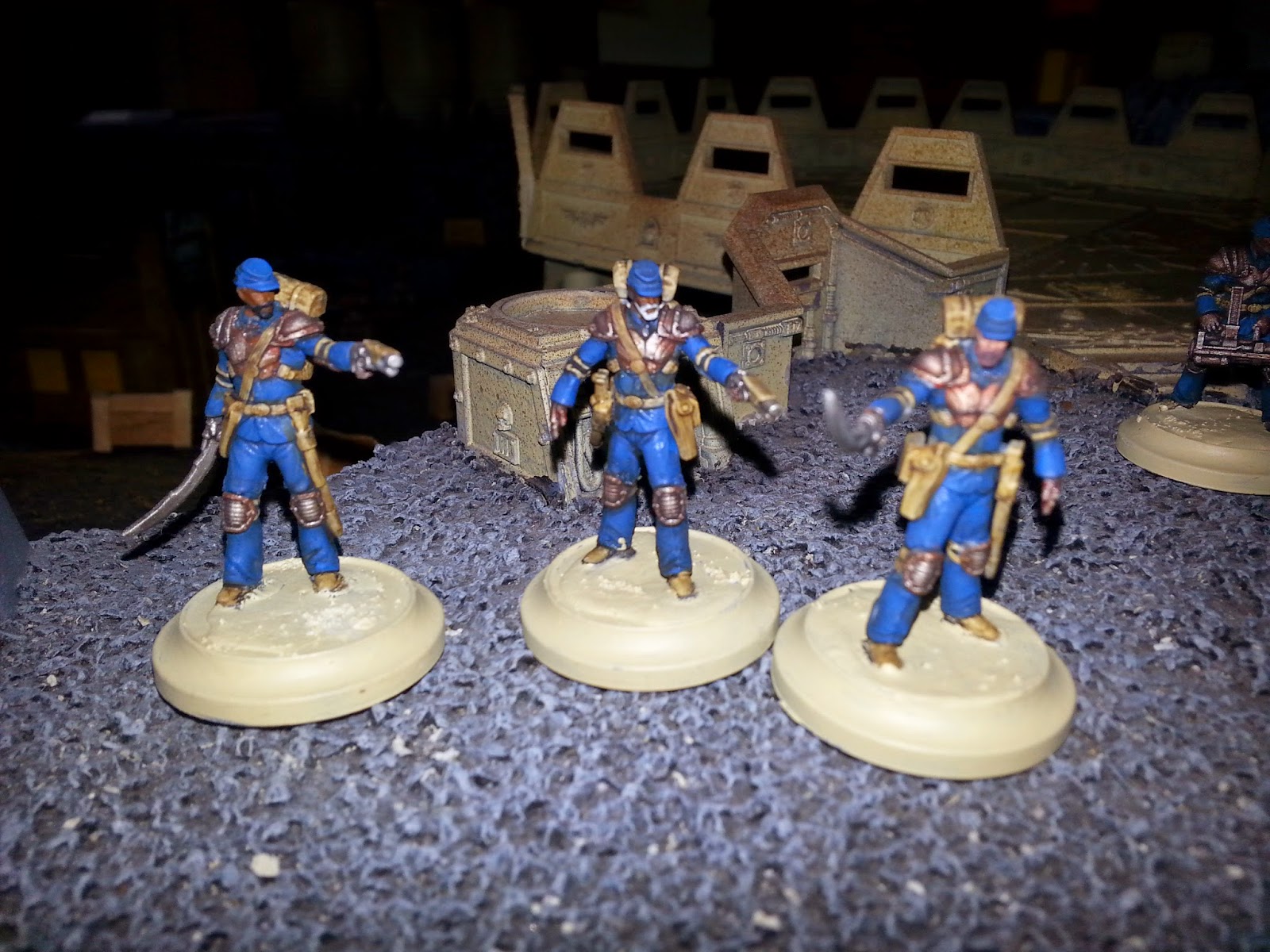 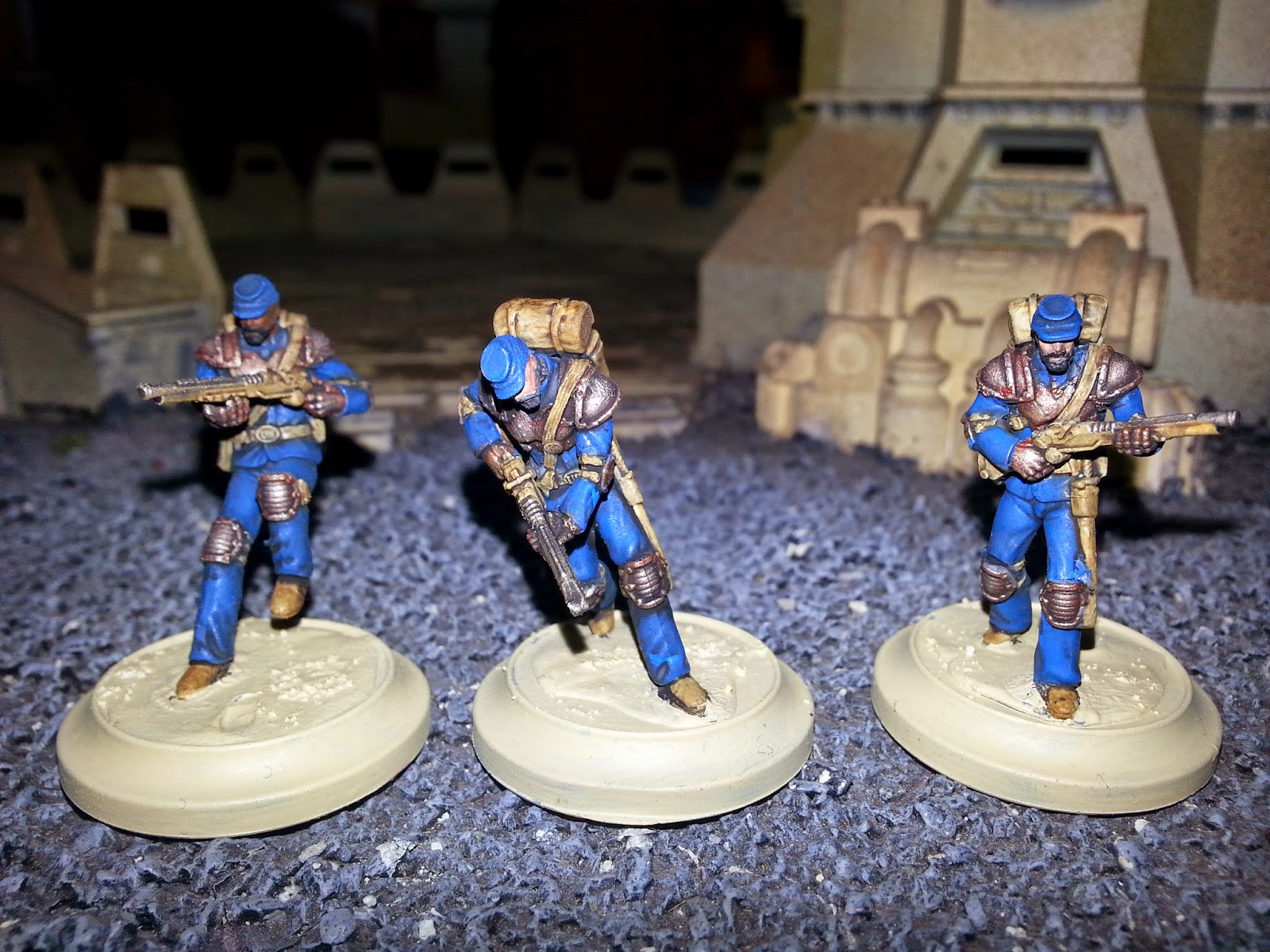 ...and the opponents, the Warrior Nation, quick piece of advice, don't get into melee with the Werewolf, it won't end well. 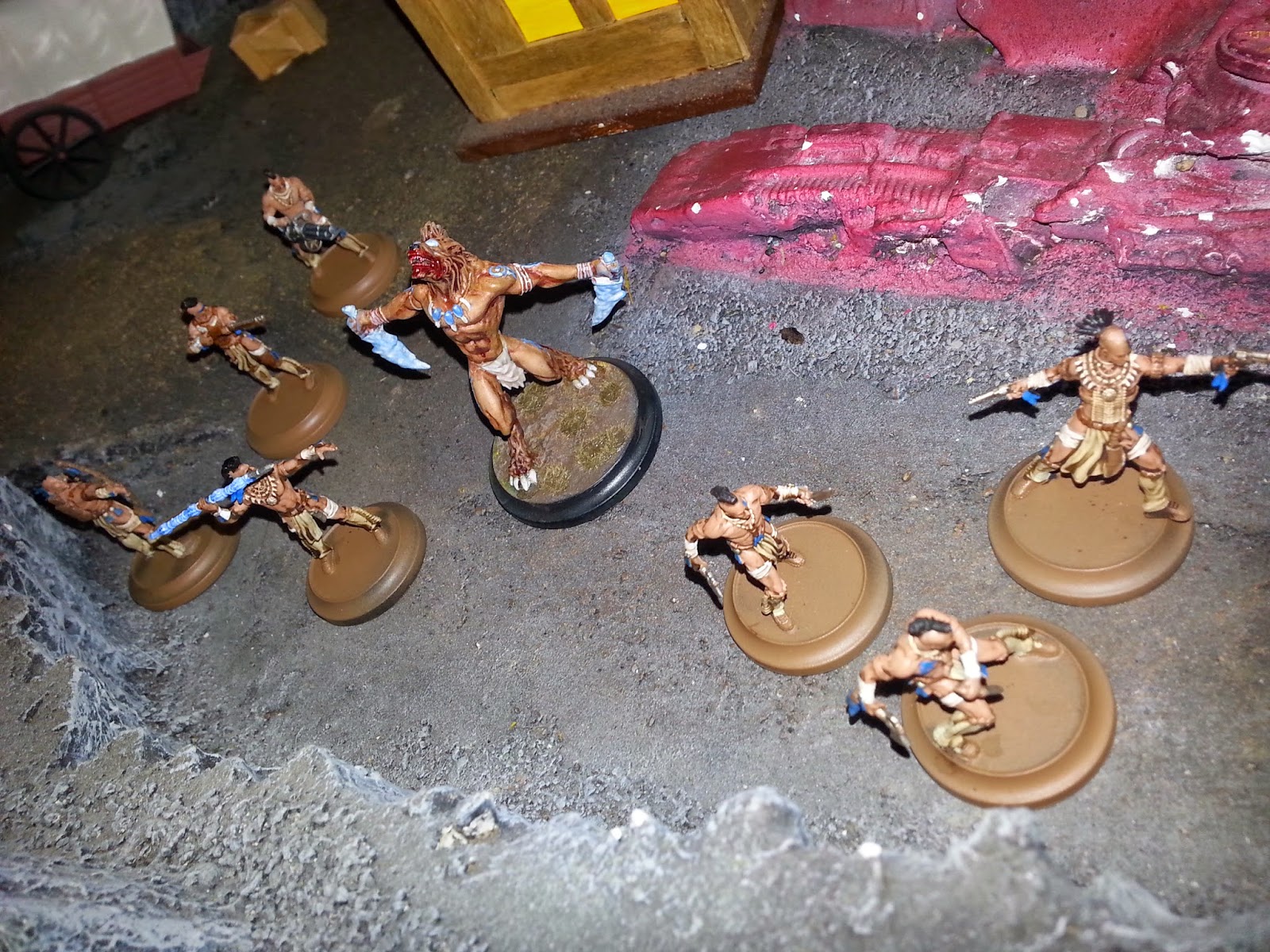 Overall, I really liked it for its speed of play, and interaction between the players at all times. I'm not completely sold on the softness of the plastic for the minis, and the price isn't bad for all that you get in the box, but I think I'll hold off to see how it takes off in the local store before buying into it, as there isn't one faction that I'm completely sold on yet stylistically.﻿
Posted by Derek at 9:53 AM 4 comments:

This month's Colore ton Monde challenge has been posted on Facebook. Last Month's entries are here. A low turn out, I assume due to the summer holidays. My entry can bee seen in better detail here. I haven't really done much painting since then, except to finish off my Dragoons. I've been waiting for the new rules for Dystopian Légions to be released, then I'll see what I'm inspired to finish. Anyway, on with this month's challenge.

The theme:
-----
* New Tech*
It's Back to School time, and the new iPhones, the new technologies are coming in left and right! For the month of September, we invite you to paint a hi-tech mini, or maybe one which has been recently released.
-----

Alright, nothing comes to mind straight away, but I'll go through the lead pile mountain and see what jumps out at me.
Posted by Derek at 3:20 PM No comments: